Lab Manager recently reported that according to a recent survey they took, 21% of laboratories intend to purchase a new fume hood in the next 12 months. The top reason cited for the new purchase was to replace an aging fume hood. How do you know if your fume hood is aging and needs to be replaced. LFFH dug into some of the reasons and ways to tell. 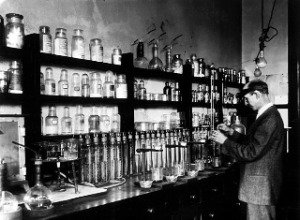 When a Fume Hood is too Old
An older model fume hood may have counter tops made from old, inefficient or even dangerous materials such as asbestos. This may also be true of the liner. If you find this to be the case, replace your fume hood immediately. Newer fume hoods are made with higher quality, safer materials that are often ecologically friendly.

How long has your sash been broken? In many aging fume hoods the sash is one of the first parts to break down. Frequent use wears out cables, pulleys or sash glides. If your fume hood is older, it’s a great time to replace the hood rather than fix the sash. You’ll see a return on your investment in recouped operational costs as newer models are often much more energy efficient. Another indication of an aging fume hood is interior contamination. Interior contamination can interfere with your results and may pose health dangers.

Upgrades
Current model fume hoods have added numerous helpful devices and elements that can streamline procedures and make your lab work safer and more efficient. For example, most older models lack air velocity alarms. Air velocity, and other such safety alarms monitor air flow, air velocity, and other indicators which may signal a danger to the user. Many high performance models on the market today operate efficiently at a much lower air flow. These low air flow fume hoods can operate at as low as 60 fpm, compared to 100 or 150 fpm common in older models. Lower airflow means lower energy consumption and a lower cost of operation.

Insufficient Abilities
If your laboratory has been in operation for any number of years, no doubt it’s grown in size and function. Added analytical equipment and additional people may mean fume hood space is at a premium. Added procedures may increase or add to the services required by your fume hood: air, gas, or vacuum for example. In many cases it may be too difficult to add new services to an existing fume hood due to mechanical piping or your fume hood location. Finally, if your fume hood isn’t equipped to handle your processes it’s time to replace it. For example, if you’ve started using harsh acids inside a standard hood, the acids can etch the sash and obstruct the view of the operator. Acids in a standard hood can cause an unsafe build-up of residue in the interior of the hood and the duct work.
Expansion
Replacing your fume hood may be necessary when you simply need more fume hood space. Consider these questions:

If you answer yes to any of these, replacing your fume hood can simplify and improve the efficiency of your workload.

Going Ductless
Modern technology has finally introduced extremely efficient ductless fume hoods. Ductless hoods are a major benefit to many labs because of the flexibility they offer. They can be placed and moved anywhere regardless of location of duct work or ventilation. A lab manager worried about taxing an already maxed out mechanical system should consider replacing existing fume hoods with ductless hoods. And the exhaust system is not the only consideration; you must also take into account the supply air. For new construction laboratories a ductless fume hood offers significant savings. Also, replacing traditional fume hoods with ductless fume hoods will save on energy use both with the operation of the hood and in heating and cooling costs. With typical fume hoods there is a huge loss of temperature up through the ducts. Heated or air-conditioned air is exhausted out through the hood. Ductless fume hoods filter then exhaust the air back into the room so there is no energy loss.

Is it possible you fall into the 21% of laboratories in the market for a new fume hood this year? New technologies and materials in the latest model fume hoods can help your lab run more efficiently and more cost effectively. Even if you aren’t considering a new purchase, inspect your existing fume hoods to make sure they are in safe operating condition.